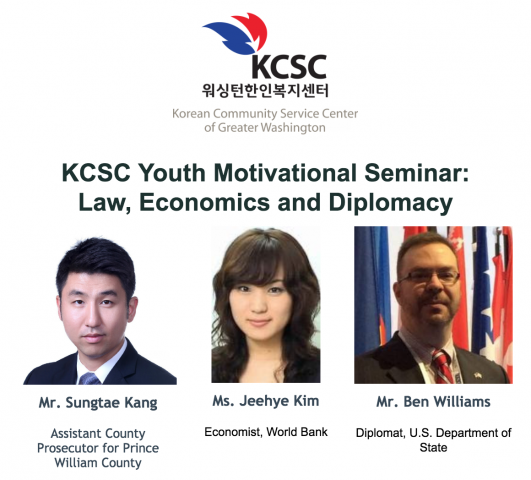 It is a rare opportunity to have such access to leaders in these fields, so please join us in welcoming these three and learning about the important work they are doing in the areas of criminal justice, economics and diplomacy.

What is KCSC Youth Motivational Seminar?

It is a series of seminars inviting young professionals actively working in important fields. The seminars will provide valuable information for adolescents dreaming of their future career. For those who are not yet sure which direction they plan to go, it will motivate them and help them to make an important decision about their future.

While our target audience is teenagers in middle school, high school, and college, everyone is invited and encouraged to attend our motivational seminars. Space is limited however, so please register via the link below, or by contacting the program coorinator, Mike O’Neill, at moneill@kcscgw.org or 703-354-6345 ext. 123

Sungtae received his undergraduate degree in accounting from the University of Illinois in Urbana-Champaign in 2006 and his Juris Doctor from the University of Kansas in 2010. After graduating from the University of Kansas he began working as an investigative analyst for the World Bank Group in Washington, D.C. In 2013, he joined the U.S. Attorney’s Office in Louisville, Kentucky as a special prosecutor and spent almost two years prosecuting federal offenses involving drug trafficking, bank robbery, immigration fraud and various white-collar crimes before returning to Northern Virginia. After a brief stint in private practice in Alexandria, he joined the Prince William County Commonwealth’s Attorney’s Office where he now prosecutes offenses ranging from simple traffic matters and drug offenses to domestic violence and robbery.

Jeehye received her master’s degree in Economics from the University of Glasgow in 2010. After graduating from the University of Glasgow, she briefly worked for J.P. Morgan in London as a financial analyst before joining the World Bank in 2011. Since joining the World Bank in 2011, she has been leading World Bank missions to client countries in sub-Saharan Africa, Central Asia and South Asia to help solve development challenges in those regions through World Bank financed loan programs and projects.

Ben received his undergraduate degree in history and master’s degree in interdisciplinary studies from the University of North Texas. He also did graduate studies in Middle East politics at the American University of Cairo and in biodefense at George Mason University. After graduation, Ben worked as an academic adviser at several universities in Texas. Ben has worked for the United States Department of State since 2009. His first diplomatic posting was as a Consular Officer in Honduras. He has since served as a Political Officer in Ecuador and Moldova. Ben speaks Spanish and Romanian and is currently learning Russian for his next assignment in Bishkek, Kyrgyzstan.